Origin of the handbook

It is now almost 60 years – I was 11 years old at the time – since my father, an unsurpassable man, gave me a first edition of his guide to Dutch coins (Handboek der Nederlandse munten) as a present to celebrate Saint Nicholas Day, along with the rhyme shown here. The first edition of the book was published in 1946.

After modest beginnings, with just 2,500 copies printed, the book rapidly gained in popularity, and by the time the fifth edition appeared in 1975 it was used worldwide as the standard reference work for Dutch coins from 1795 onwards. The numbers listed in the book are used internationally for identification purposes. 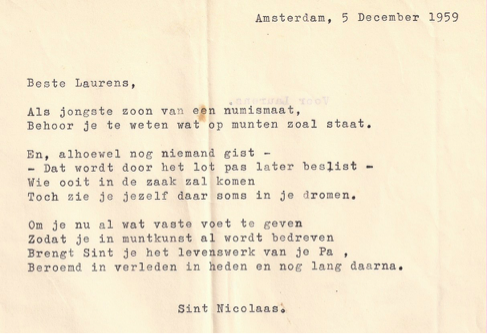 Over the years, I have seen many new coins and coin variants. I have catalogued the new knowledge I have gained in a very contemporary way, including an appropriate numbering system. This database of Dutch coins from 1795-2001 is unique, revolutionary and freely accessible to anyone – unimaginable in 1946, but entirely apt in the present time!

In hindsight, we’re wondering why it has taken us so long to share the information with collectors in this way. Publishing relatively small print runs of books is a costly and very time-consuming business, plus a book is by its very nature a static medium. Today, the internet offers us a whole new world of opportunities for sharing knowledge, and I am keen to take advantage of them. Providing open access to information about coins in this database will enable the knowledge to be shared more easily and more widely. By sharing it free of charge, I hope to reach a new generation of potential coin collectors and to fuel enthusiasm for numismatics. Another significant benefit of this database is that it can be updated at any time.

During the development of this database I have had to make choices about which pieces to include. The first clear-cut criterion is the time period; all the items in this database are Dutch coins from 1795-2001. I regard the euro, which was introduced in 2002, as a separate domain so it is not included here. The second criterion relates to the fact that I have only included – besides the regular coinage – those items that have been die-produced in one way or another. New variants have only been included if they can unambiguously be described as such. After all, a description such as “with slightly altered design” hardly gives collectors much to go on.

Several large and smaller collections were re-examined by me, which enabled some minor inaccuracies in my father's book to be corrected. Over the years, several new pieces have become known. Especially the Batavian Republic, the Kingdom of Holland under Lodewijk Napoleon and Wilhelmina added many new variants and designs.

I have also paid careful attention to replicating the inscriptions correctly. The text shown in blue is the literal inscription on the coin. The photos are in full colour wherever possible. It was an exciting endeavour to track down all the pieces – many of them unique items – again. In the case of extremely rare coins I have often indicated their current locations. Nowadays, the collections of the former Koninklijk Penningkabinet (KPK), the former ‘s RijksMunt (RM) museum and De Nederlandsche Bank have been combined and form the National Numismatic Collection (NNC) of De Nederlandsche Bank. The photos displayed in the database are from our own archive that we have built up over the years. Various photos have also been provided courtesy of De Nederlandsche Bank, Het Centraal Museum Utrecht and other third parties. I would particularly like to thank Mr W. Coenen for altruistically making his collection available for photography purposes. I would like to express my deepest gratitude to my wife Carla and daughter Yvette who have done a tremendous amount of work to shape this digital project.

In terms of general numismatics-related terminology, you can also refer to the Encyclopedie van munten en papiergeld which has been digitised by Bert van Beek.

To teach myself how to use it, I will be gradually adding content in chronological order, starting with the Batavian Republic (1795-1805). You are welcome to send me any questions, comments or feedback